This summer 2012, with the support of KNOW, Michael Dwyer traveled to Palestine/Israel as part of a Hope Equals youth peace delegation.  Michael is a peace activist, a founder of West Michigan Justice for Palestine student group at Western Michigan University. He recently graduated with a degree in English/Creative Writing.

Hope Equals is a network of activists supporting the reconciliation efforts of Israelis and Palestinians. This summer was an especially exciting solidarity trip, “Hope Equals Art”. A delegation of North American students talked and walked with peacemakers on the ground. In addition they engaged in creative writing workshops with Israelis and Palestinians to explore the relationship between social justice and art.

Reporting from Michael:
We met with an Israeli poet, Yonatan. Yonatan grew up in very conservative religious settlement. In his poetry, he writes about life on the settlement. He also tries to imagine the condition of the lives of the Palestinian children living near the settlement. After serving in the IDF, he traveled abroad for four years. During this time his attitude toward the conflict changed significantly. He is now very critical of the settlement movement and believes that peace is not possible without a change of heart in Israel. He believes that art is very important in bringing about that change.

We also met with several Palestinian visual artists attending a school near Bethlehem. We learned from them about the history of film making in Palestine and how it has been affected by the Israeli occupation. We made stencils together and put them on the separation barrier between Bethlehem and Jerusalem.

The following are photos and captions from the trip: 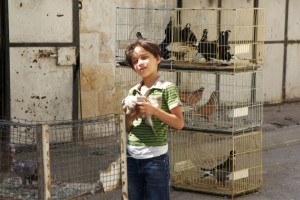 Hebron: A Palestinian boy tends to his birds in the market.  On the roof above him an Israeli soldier points his gun down at the boy.

Dheisheh Refugee Camp: The houses and buildings in the camp are very cramped.  They often have to build houses on top of one another and sometimes there are several families living in one house.  The shallow, thin path dug out in the road used to serve as the camp’s sewage system.  Since then governments around the world (not Israel) have invested money in the camp to improve the living conditions. 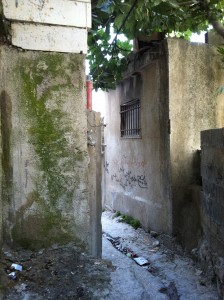 Dheisheh Refugee Camp: As we pass by this woman and her son, she begins to talk in Arabic to our guide.  She is hesitant at first, but our guide encourages her to tell her story, and she tells us that one of her other sons has been given ten life sentences from Israel.  Another one is waiting for a sentence. 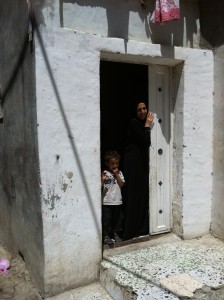 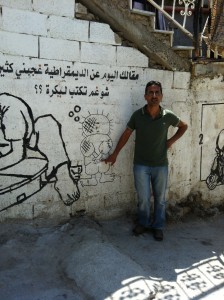 East Jerusalem: Cheska, an Israeli activist working for the Israeli Committee Against Home Demolitions (ICHAD) uses a map to explain the harmful impact that Jewish only settlements have on Palestinians living in East Jerusalem. 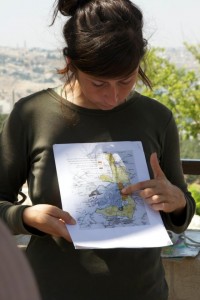 Hebron: A barrier built by the Palestinians to block objects thrown down at them by Israeli settlers living above them.  The settlers in Hebron are some of the most violent.  Christian Peace Maker Teams, a group of Christian peace activists living in Hebron, told us that they have been attacked by the settlers several times.  One lady even tried to throw rocks at them and run over them with her car.  The Israeli soldiers usually stand by and do nothing.  Under international law, settlers have no legal right to be living in the Palestinian territories. 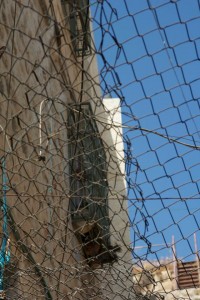 Ma’ale Adumim:  Ma’ale Adumim is an illegal Israeli settlement right outside of Jerusalem.  The Israeli government has built roads to connect it to Jerusalem.  The settlement gets water and sanitation services, whereas the Palestinians living nearby have no access to these services, even though they pay taxes for them.  As we drove through the West Bank, we could see the stark contrast between prosperous Jewish settlements and poor Palestinian neighborhoods which have little or no access to basic social services provided by Israel, even though they are living under Israeli occupation are therefore legally entitled to these services. 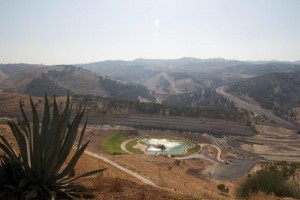 East Jerusalem: The separation wall built by Israel weaves in and out of the West Bank, disrupting social and economic life for the Palestinians.  This part of the wall separates two Palestinian villages from one another.  What security purpose is served by dividing two villages from one another?  In 2004, the International Court of Justice declared the wall to be illegal.

Bethlehem: This part of the wall separates Jerusalem from Bethlehem.  Our group puts our art on the wall with Palestinian artists from a school near Bethlehem.  The wall is full of political art denouncing the Israeli occupation. 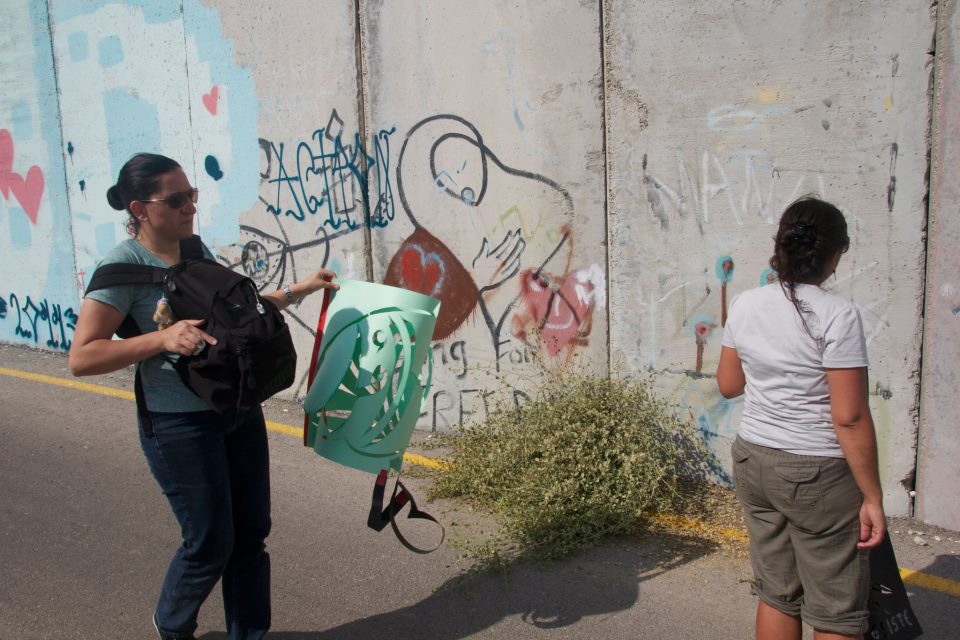 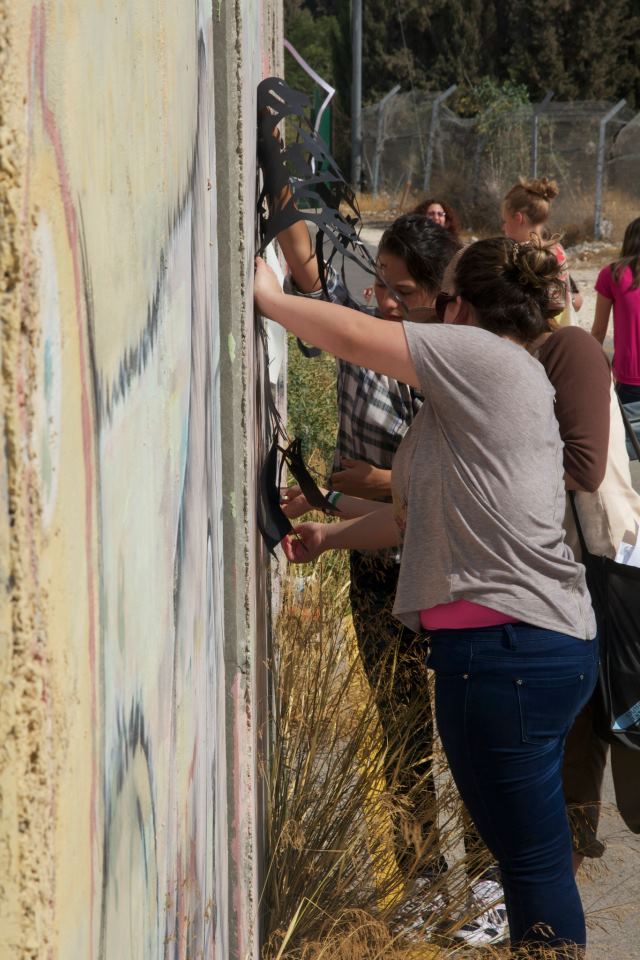 Thabra: A Palestinian family who Hope Equals helped build a home for last year.  Fourth from the left is a sixteen year old boy who cannot walk or talk. When he was eight years old he got a terrible fever.  His parents could not bring him to the hospital because of a curfew imposed by Israel at the time.  Because he could not receive proper care, the flow of oxygen to his brain stopped, giving him brain damage that makes it impossible for him to ever walk or talk again. 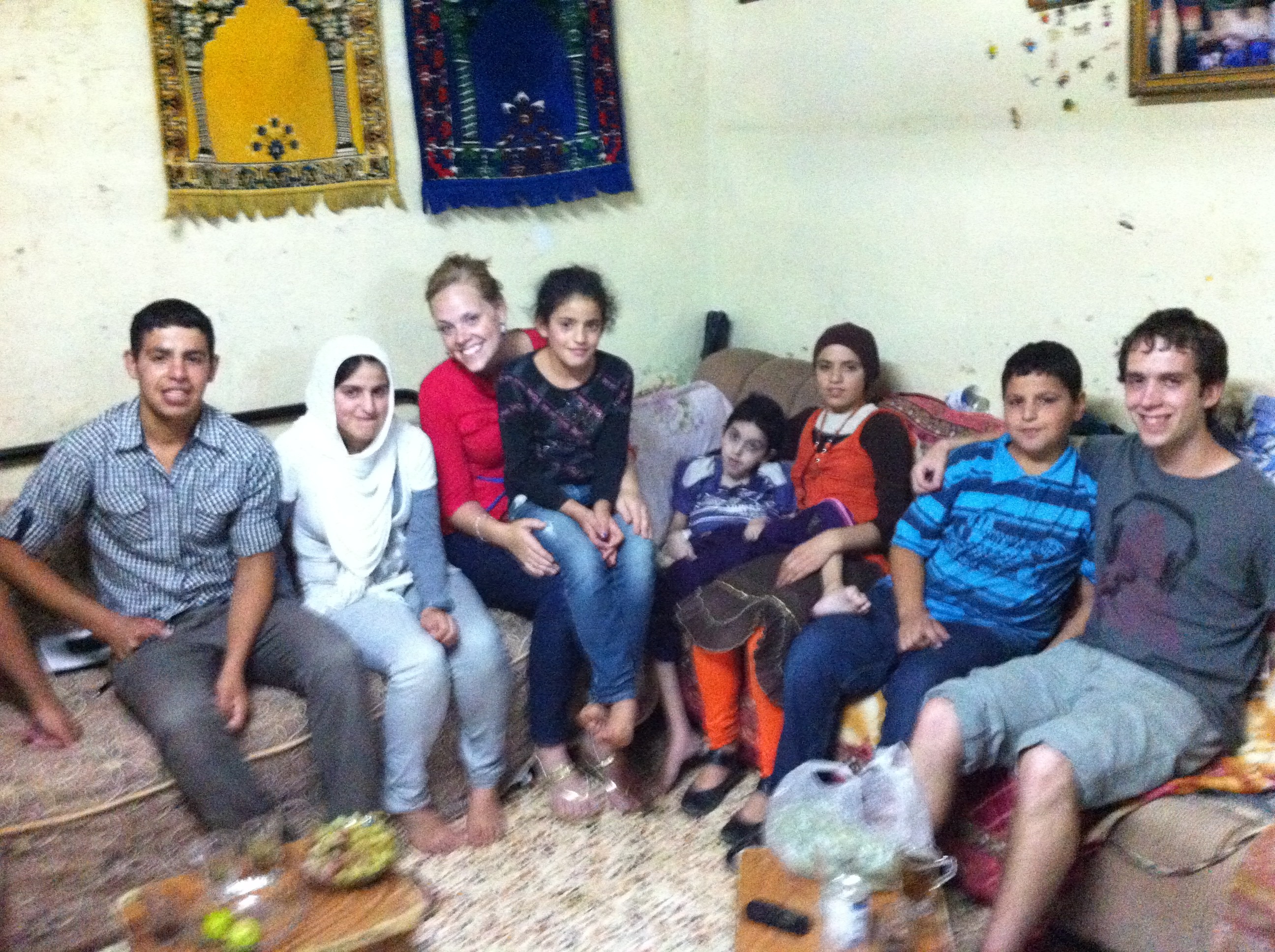