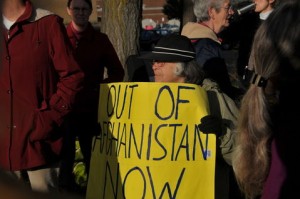 “Out of Afghanistan.”  You might see these hand-painted signs, held up by a friendly group, in front of the Federal Building, if you happen to drive down Michigan Avenue downtown between noon and 1:00 pm on any given Sunday.  This is a weekly vigil by Kalamazoo Nonviolent Opponents of War (KNOW) which believes that we must bring all our troops home from Afghanistan, and we must do it now.  Judging by the “thumbs up” and honking response we get from passing cars, Kalamazoo agrees with us.  National polls show that the majority of Americans also agree with us.

The debate over Afghanistan as heard in the media, in the halls of Congress and the White House, and in the well-funded Washington think tanks, does not even consider withdrawal as an option.  The debate seems to be over how much we should increase our troop presence.  This is the wrong debate to have, when the only course of action which makes sense is to bring all our troops home.

Why do we say “Out of Afghanistan”?  Some might say we would open the US up to another tragic 9/11 terrorist attack if we were to leave Afghanistan.  Let’s examine this argument a moment.  First of all, the 9/11 attackers did their planning in Germany, trained in Florida, and came from Saudi Arabia.  How would troops in Afghanistan be of any value in stopping this?  Let’s assume for the sake of argument, the worse case scenario, that we brought our troops home, the Taliban overran the existing government in Kabul, and allowed Al-Qaeda to have a safe haven there.  This is not likely since the Taliban has a limited nationalist goal of an Islamist government in Afghanistan, and does not necessarily find much in common with Al-Qaeda.  But even assuming Al-Qaeda can return to live in the remote caves of Afghanistan; it is ludicrous to think that there is something special about this location which gives them special powers.  A terrorist group planning an atrocity does not need a cave in Afghanistan to do so.  This can be done anywhere.

What more and more Americans are realizing is that we are being sold a bill of goods by those who profit by continued war in Afghanistan.  The presence of foreign troops over there serves as a giant recruiting poster for Al-Qaeda.  We are not safer here in the US as we bomb targets using remote-controlled drone aircraft and employ the latest military hardware.  On the contrary, as more and more civilian die as a result of the war, resentment against the US is only growing.  This is confirmed by polls taken in Afghanistan itself which show that the Afghan people also want US troops to leave.

The solution is schools, not bombs.  That is the take-away message from the recent talk from Greg Mortensen, author of “Three Cups of Tea”.  The cost of a single US soldier for a year in Afghanistan can easily build and staff an elementary school there for many years.  If we are truly there because we are concerned about terrorism, we need to stop and think.  People all over the world want the same thing: a decent life, education, and the chance to better themselves.  Providing schools and jobs which are provided by Afghan organizations, not war profiteers such as Halliburton, is the real answer to provide long-term stability.

The heartbreak is that every day, the carnage continues.  Our relatives, friends and neighbors in the US armed services are among the dying and wounded.  The people of Afghanistan suffer untold suffering and death.  Here at home we cannot afford to provide education, jobs, and healthcare to our own citizens, and meanwhile billions of borrowed dollars are spent in Afghanistan.

We in Michigan have a special opportunity and duty to speak up.  Our own Senator Carl Levin is the chair of the Chairman of the Senate Armed Services Committee.  We must let him know that we want our troops “Out of Afghanistan”.  And, please come and join us next Sunday!

This article was published by Kalamazoo Nonviolent Opponents of War, as a Viewpoint in the Kalamazoo Gazette, November 20, 2009.